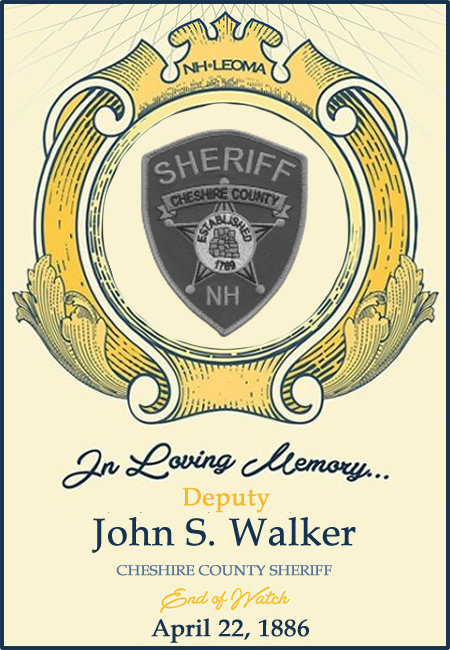 On March 16, 1886, Deputy Walker was assisting a Mrs. Emma Josephine Nash, (Ms. Jennings); remove some of her belongings from her home in Walpole NH.  Ms. Jennings was in a reported abusive relationship and the abuse led Ms. Jennings to begin divorce proceedings at the Cheshire County Superior Court.  She asked for assistance of the Cheshire County Sheriff’s Office to assist with the removal of her belongings. The husband, Charles Jennings was cooperative during the removal until the wagoner assisting with the removal of the property inadvertently loaded a box that Mr. Jennings did not want removed from the residence.   Mr. Jennings became enraged and attacked Deputy Walker with an axe striking him in the head and arm causing severe injuries to Deputy Walker. Deputy Walker was not able to recover from these severe injuries and lost his life on April 22, 1886.

At the time of his death, Deputy Walker was 55 years old. He left behind his wife, Emma and his son John S. Walker Jr.