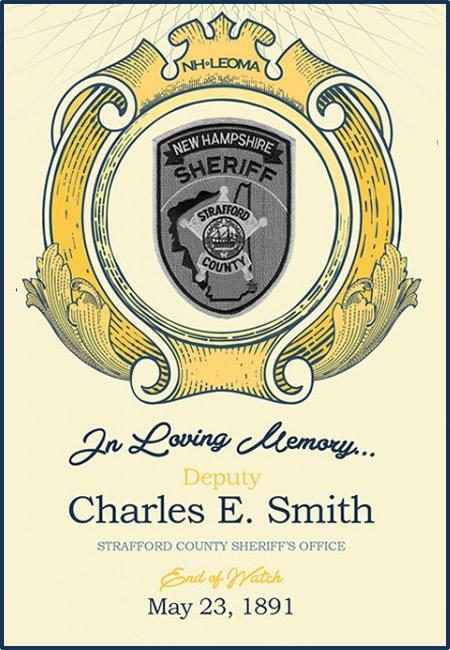 Born in Barrington, New Hampshire in 1844 to Winthrop and Nancy (Hall) Smith, Deputy Smith was a farmer, a merchant, and a town selectman as well as a six year member of the Strafford County Sheriff ’s Office.

In April 1891, a wagon and a pair of black horses were stolen by a man named McArthur, from the stable at Calef ’s Country Store/Inn in Barrington.  Shortly thereafter, a posse of a dozen men, led by Deputy Smith encountered  McArthur in his hiding place. Deputy Smith attempted to arrest him but McArthur ran off, shooting behind him as he went. McArthur was shot in the back by a civilian member of the posse and as Deputy Smith made a second attempt to arrest him, McArthur shot him in the hip at close range. Newspaper reports state that an injured Deputy Smith still managed to bore the thief to the ground.

Unfortunately, gangrene developed in Deputy Smith’s wound and he died as a result of the infection on May 23, 1891.