Fallen officers honored, led by a little girl with an old hat

One person, more than any other, stood out yesterday, her eyes hidden beneath a piece of history.

One person, sitting in the front row, looked like the relative of a fallen officer, in a sea of relatives of fallen officers who sat near the corner of North State and Capitol streets.

The tan police hat, obviously from another era, worn by 9-year-old Martina Graziano, gave it away. Her grandfather, Edward Graziano, wore it as a member of the Nashua Police Department more than 50 years ago.

A motorcycle cop patrolling Route 3, Graziano’s bike was struck by a car that had been moving next to him before veering into his lane.

He was pinned beneath the wreckage and died at the hospital on Aug. 14, 1964. He was 26, the father of three, one of dozens of stories at the New Hampshire Law Enforcement Officers Memorial.

“After my father got killed, we had a big chest that we kept all his stuff in,” one of Edward Graziano’s three children, Mark Graziano, told me after the ceremony. “Eddie (Edward’s grandson, Mark’s son) used to wear it, and now she’s wearing it. It has its history. It’s old. It’s older than a lot of the people here.”

Mark was 5 years old when his father died. His brother, Brian, was 4, his sister, Keri, 6 months. Mark, a truck driver, is raising his own family now in Salem.

He said his father liked to fish, and he’d take Mark to the motorcycle races in Loudon, at what used to be Bryar Motorsports Park and is now New Hampshire Motor Speedway.

He recalled the day of the accident.

“I remember I was sitting in our living room and a bunch of police cars came from around the corner, and I just knew something wasn’t right,” Mark said. “They left an officer with us while my mother went to the hospital. I was young. I didn’t quite understand death.” 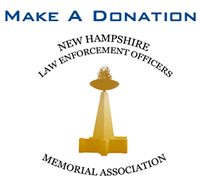