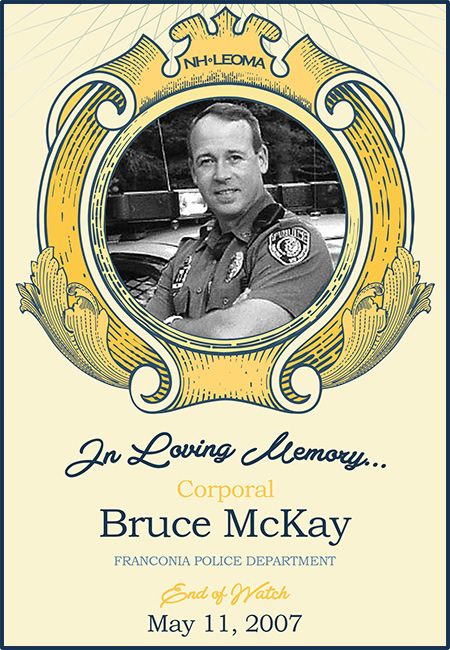 Upon graduation from New England College in Henniker, New Hampshire with a B.S. in Environmental Science, McKay worked in the corporate world. McKay also volunteered as a fire fighter and EMT while in college and later with the Woodsville Ambulance Company and the Lisbon Fire Department.

Corporal McKay was hired by the Franconia Police Department on September 1, 1995. At approximately 6:30 p.m. on May 11, 2007 Corporal Bruce McKay, a 12 year veteran with the Franconia Police Department, attempted to stop a vehicle for speeding and a problem with the vehicle’s registration. Corporal McKay identified the operator as a local resident who he had encounters with in the past. In the course of the motor vehicle stop the operator shot Corporal McKay and then ran McKay down with the motorist’s vehicle, killing McKay. A witness attempted to protect Corporal McKay from further harm by moving his own vehicle near McKay and ordering the operator of the vehicle to stop and drop his firearm. The operator failed to comply with the orders and was shot and killed by the witness.

Corporal McKay identified the importance of the New Hampshire Law Enforcement Memorial and was continually seeking support for the Memorial and reminding officers of its importance. Each year he led a contingent of Officers to the annual ceremony. At the time of his death Corporal McKay left behind his 10-year old daughter, a 14-year old step daughter, and his fiancé, whom he planned to marry in July of 2007. 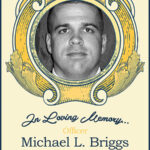