Officer George E. Pray was born in Dover in 1856 to John W. and Harriet (Lang) Pray. At the time of his death Officer Pray worked for the Dover Police Department as a Special Police Officer.

On New Year’s Eve, 1888, Special Officer Pray and a man named William E. Robinson were assigned to go to the residence of John Huckins in Madbury to take Charles Tanner into custody. Tanner had previously been at the Concord Insane Asylum, but was recently living under the guardianship of John Huckins in Madbury. Huckins determined Tanner was becoming too violent and asked Dover City Marshal James Fogarty to send two men to take Tanner into custody and return him to Concord.

Upon their arrival at the Huckins residence, Pray and Robinson found Tanner sitting by the fire in the kitchen. When Tanner was told why they were there, he jumped out of his chair and ran to his chamber upstairs. Pray was about halfway up the stairs with Robinson following when Tanner burst out his room holding a single barreled muzzle loader. He quickly raised the gun and shot Officer George Pray in the chest, killing him instantly. Tanner was later arrested at his father’s house in Barrington Depot.

At the time of his death Officer Pray was 33-years-old and left behind his wife and three children. 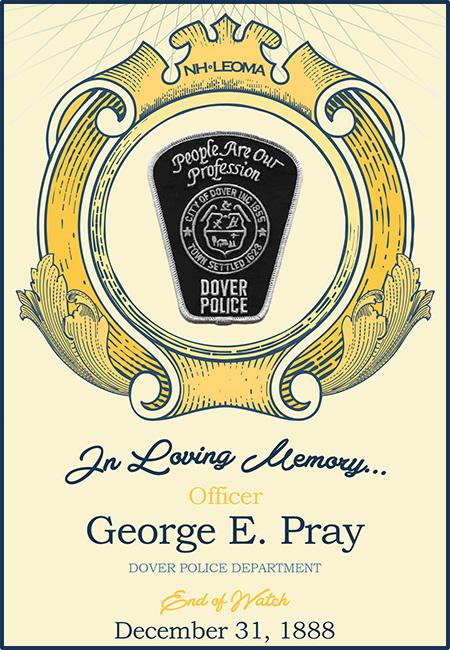